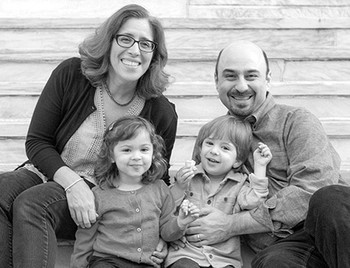 On long, childhood drives to Cape Cod from New Jersey, I would to look out of the backseat window and say, “If I had a camera I would have taken a picture of that place we just drove past.” Much to my delight, as a sophomore in high school, I was mistakenly placed into a senior level photography class. Since then I have never been without a camera.

I graduated in 1993, with a BFA in Photography (and a minor in metalsmithing) from University of the Arts in Philadelphia, PA.

Before becoming a full-time photographer, I worked for a decade in journalism in the US and internationally as an Art Director and Creative Director at the Philadelphia Weekly, The Wall Street Journal and WSJ.com.

After leaving journalism in 2004, I opened my own studio in Manhattan where I lived for 20 years, met my husband, and had twins before moving to Princeton, NJ in 2014.

I have won awards for my photography and art direction from Kolo Album Company, How Magazine, The Society of Newspaper Design and the Alternative Press Association. I have lectured on careers and women in the arts at The Cooper Union, New York University, University of the Arts, Philadelphia Institute of Art, and The Peddie School.